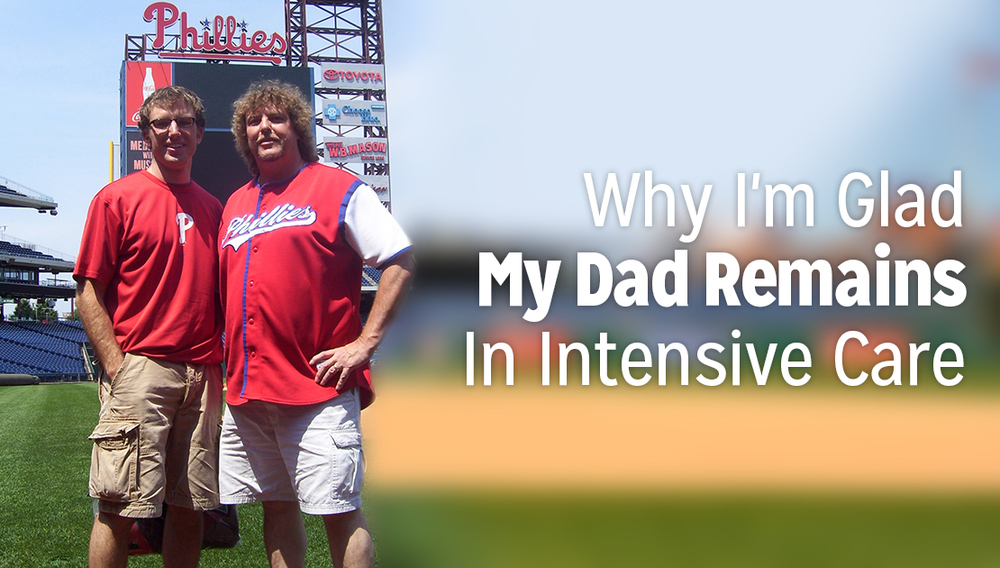 Last Sunday I received that phone call–the kind that leaves your legs weak and your stomach churning.

My dad, who battled congestive heart failure for the past 21 years, was now critical. His heart, on its own, had officially failed. The left chamber was no longer able to pump blood into his organs. They too were shutting down.

In the next frantic and stressed three hours, with no planes available until the next day, we decided to pack the family into the car and drive the 17 hours from Missouri to Pennsylvania to be with him. My wife, Christi, is a hero. In the midst of the unknowns and all of the emotions and illogical thinking that accompanies it, she packed up all of the belongings for a six-week-old, two-year-old, and herself, and bravely stepped foot into the car for the next 17 hours through the night–all for the sake of helping my dad through the toughest battle of his life.

With 30 minutes of sleep in a 42 hour span and a drive half way across the country, we arrived in Hershey, Pennsylvania in time to see my dad coming out of surgery where he received a heart pump (aka. LVAD) to do the work of the left chamber for him.

I haven’t been able to work much balancing an infant who doesn’t sleep at night, long drives to Hershey, time with my dad, not being able to sleep in our own beds, and just being out of our family routine. Not only that, my dad experienced a major post surgery setback that nearly took his life last Thursday. The recovery since then has been slow but steady. Our emotions as a family anything but.

I know it sounds crazy to have driven this far with such little kids, but even with all of the inconveniences, we have zero regrets. I’ll never be able to repay the man who taught me what it was and means to be a father, not by what he said, but by what he did. The least I could do was be by his bedside for the most painful and difficult days of his life.

I just hope I’m the kind of dad whose kids will one day do the same.

Dads, you have no idea the significance and impact you have on the lives of your kids. I almost lost my dad a couple of times this week.  Facing life without my dad, I drove through the hills of Pennsylvania, past the places where many of our memories together reside–sights, smells, and sounds that brought me face-to-face with the lessons he taught me throughout my childhood years.  What’s amazing about those lessons is that every one of them were a result of what he did, not what he said. By being present in the good times and bad, and simply showing me how much I was loved.

Prayers for my dad are being answered in remarkable ways. He is doing much better and will prayerfully be out of the intensive care unit in the next few days.

Though the incredible team in the intensive care unit at Penn State Hershey Medical Center are repairing a physically broken heart, there’s one intensive care unit he’ll never leave–intensively caring for the emotional hearts of his children. And for that, I’m grateful.

When I left yesterday, I praised him for putting up such a great fight. He smiled and said, “I have grandkids to watch grow up.”

My dad’s heart is functioning well.

I thought it’d be fitting to share at the end of this post some of the specific lessons I’ve learned from my dad. I wrote them earlier this year in a post called The Best Father’s Day Gift Idea Ever. I pray you can use them in the intensive care of your children.